“Sights can be now effectively and accurately used in low-light conditions by two primary methods, by addition of battery-free visible light sources using fiber optic or tritium sources to align the shooter’s eye with the target.”

“The best of both illumination technologies in one sight is not a wish, but now a reality as there are several options from optics and sighting system manufacturers like Meprolight.”

To accurately place a projectile where a shooter wants, the simple, physical fact is both the target and the sights needs to be clearly visible.

If you can’t see one or the other, then it’s a wasted or unsafe shot. There have been whole markets established to manufacture products that illuminate targets including lights of all kinds both on and off the firearm as well as a separate and very useful subset of training for shooters to engage in low-light conditions (that every defensive shooter should attend.)

The other needed requirement for accurate shooting is being able to see and align your sights. That has been accomplished in a variety of solutions from everything from optics like a red dot, reflex, holographic or powered optics as well as ways to illuminate open sights.

Open sights, also called iron sights, and even optical sights like red dot and telescopic sights can be now effectively and accurately used in low-light conditions by two primary methods, by addition of battery-free visible light reticles using fiber optic or tritium sources to align the shooter’s eye with the target.

What are Tritium Sights?

Shooters appreciate the use of glowing tritium sights to provide a clear target solution. But how does that incredible technology work?

Tritium sights contain a small vial of gaseous radioactive tritium that emits charged particles interacting with an internal coating of phosphor causing a reaction that produces radioluminescence and phosphorescence the shooter sees as a glowing dot.

The gaseous tritium is a radioactive isotope of hydrogen that constantly decays through the emission of beta particles and requires no additional power source but as a byproduct, produces a low-intensity light that won’t degrade human night vision.

The small vials of tritium with a phosphor coating are called a gaseous tritium light source (GTLS), or since the tritium undergoes energetic beta decay, they are also referred to as a “beta light.”

Being a radioactive beta decay source, every GTLS starts to diminish in intensity from the moment of encapsulation by a process called a half-life which is the amount of time the source takes to naturally decay by half.

The half-life of tritium is 12.32 years meaning that in about ten years the tritium sight has lost about half of its “glow” (still visible though) and in twenty years has lost most of its potency. In addition, over that same time, the degradation of the phosphor will also cause the brightness of a tritium tube to decrease.

Advantages and Disadvantages of Tritium Sights

Tritium sights emit a non-adjustable and constant glow that cannot be lessened or increased by the shooter meaning that they may be less visible in open sunshine or direct light but appear bright in complete darkness.

However, unlike fiber optic sights, tritium night sights can be used in total blackout conditions, providing a clear targeting opportunity. The phosphor compound can be chemically designed to produce different colors of light by altering the emission wavelength that is seen by the human eye as green, red, blue, yellow, purple, orange, and white dots.

Because of the combined effects of radioluminescence and phosphorescence as well as what the human eye sees best, the green tritium sights appear brightest, and red less so.

OK, so does having several radioactive sources on my pistol pose a threat? Damn good question. Firstly, the Beta radiation emitted is not like the high energy gamma rays that pose a greater threat of physiological damage but are so weak that most don’t even leave the vial, and the ones that do are stopped by the top layers of cells on a human body.

Since a Beta source is considered to be an ingestion hazard, a useful precaution is if rough handling breaks a tritium vial don’t breathe in around the broken vial and exit if you are in an enclosed area.

A fiber optic sight is simply a sight with an optical fiber or fibers partially exposed to absorb natural light and transmit the illumination seen as an illuminated dot. This can be open sights for a pistol or integrated into an optical sight like a red dot or to illuminate a reticle in a telescopic sight.

An optical fiber is simply optically dense plastic or a glass filament that draws in available light and then because of total internal reflection, the light bounces off the internal cladding without much loss that confines most of the light to the core, basically condensing it, until reaching the end of the fiber where all the collected light is released.

In order to be collected in the fiber, light must strike the boundary layer with an angle less than the critical angle to travel down the fiber without leaking out. This range of angles is called the acceptance cone of the fiber so that light will propagate down the core of the fiber. The end result is an illuminated dot, image, or reticle brighter than the available, surrounding light because of the concentrating effect of the internal reflection.

What are the Advantages and Disadvantages of Fiber Optic Sights?

Fiber Optic sights have an illuminated dot or reticle completely dependent on the available light. That means in total darkness, there will no visible lit image while on a bright day, and a long shot on a small target, the fiber optic lit reticule’s brilliance can easily mask or obscure the target forcing some operators to use tape to cover some or all of the exposed fibers.

A real plus for fiber optics is when going in and out of different light conditions, the fiber optic sight will naturally adjust to provide the shooter with a proportionally lit image, so it won’t be suddenly too bright going from outside to in, or too dim to use going from inside to outside.

Those who have been using a powered red dot outside, adjusted by the shooter for clarity in the bright sun, and then duck into a doorway and suddenly have an overpowering red glare knows that this is real. The good news is fiber optic sights do not have a half-life, so will never dwindle in intensity and are appreciably less expensive than Tritium sights.

Tritium and Fiber Optic sights are excellent for their strengths. Tritium is great for a constant glow that will always be available (until its half-life diminishes its glow) while fiber optic sights are cheaper, and proportionally brighter to the ambient light (until it’s totally dark.) I use both and work around their weaknesses but there’s an option better than choosing just

Fiber optic vs. Tritium Sights: Which one is Better?

Which is better is very dependent on what the shooter wants to do with it. If cost is a consideration, fiber optics are the way to go. If you are going to use it in a totally dark environment, tritium sights are the best choice.

If you are concerned about having a sight that loses its illumination over time, we are back to fiber optics. But what is better than either? BOTH! Getting the best of both illumination technologies in one sight is not a wish, but now a reality as there are several options from optics and sighting system manufacturers like Meprolight® that provide a shooter with sights with both features.

Utilizing patented fiber optic technology, Meprolight® combined tritium with fiber optics to create the combat proven, best-selling Mepro M21 reflex (red dot) sight for long guns and the Mepro FT Bullseye™, a single rear micro dot style sight that works with no batteries needed. Each of those modern sights can be used night or day, with every advantage of both.

Recognizing this, SIG SAUER has released their new P365 & P938 micro-compact pistol equipped from the factory with the Meprolight FT Bullseye sight! SIG has said that “the integrated, flush-mounted FT Bullseye sight mounted directly into the slide is intuitive, and easy for the untrained eye to pick-up for fast target acquisition.

” The FT Bullseye is a shortened optic with an optical lens, tritium light source vial illuminating a bullseye reticle that once the dot is centered in the circle creating a bullseye, you’re on target. The low-profile design works perfectly with most standard holsters.

Shooters can upgrade their own sights with the Mepro FT Bullseye™ by simply replacing their front or rear sight with a red or green bullseye reticle for many of the most popular self-defense pistols.

I have had a Mepro FT Bullseye™ on my EDC Glock 43 for several years, and EVERY person that has shot my G43, absolutely is impressed by its accuracy and excellent sight picture. I also was impressed that I still could use my pancake leather holster after I replaced the original sights.

Meprolight guarantees the tritium luminance to last up to 12 years. For more information or to find your local Meprolight Dealer, visit Meprolight.com 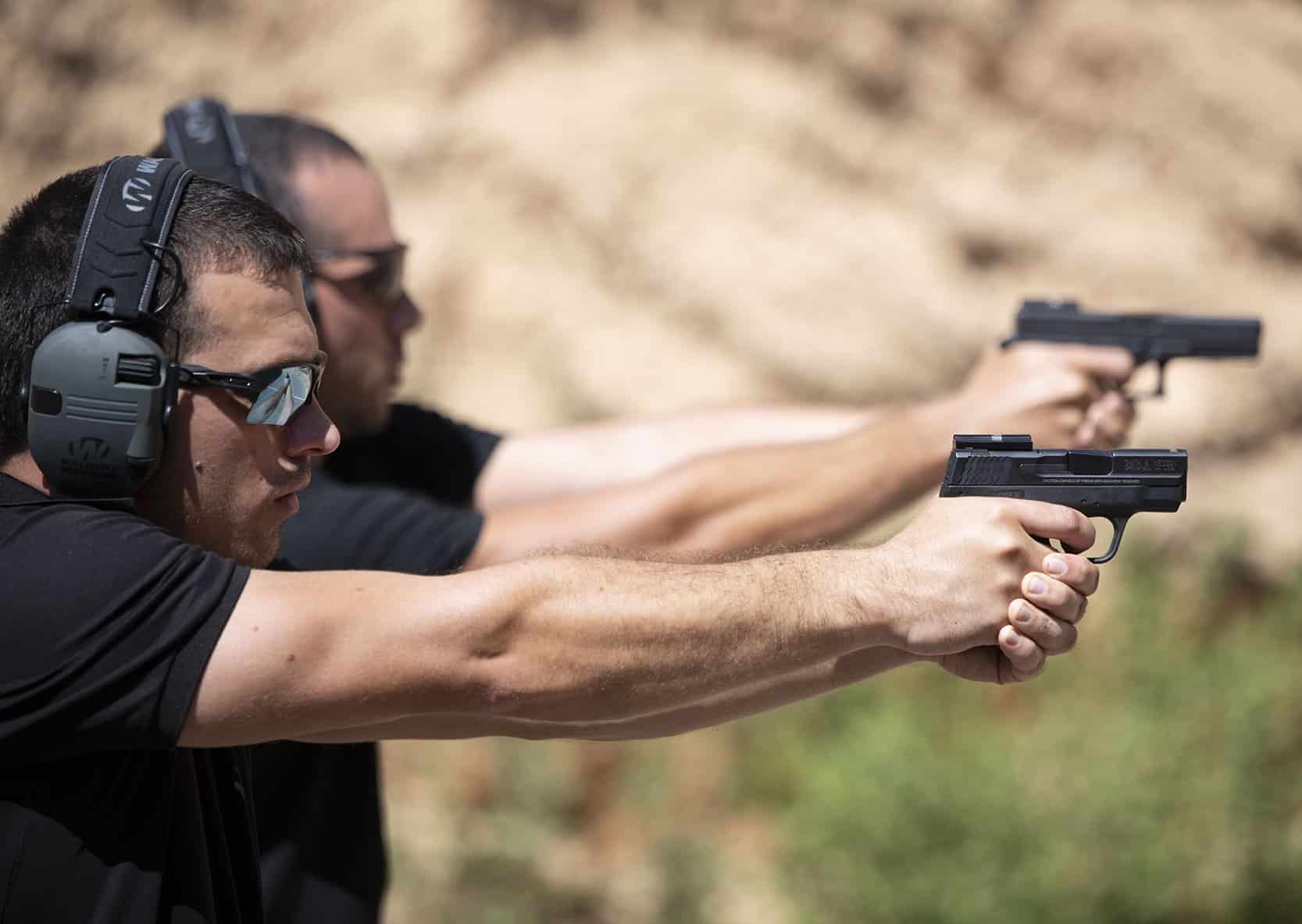 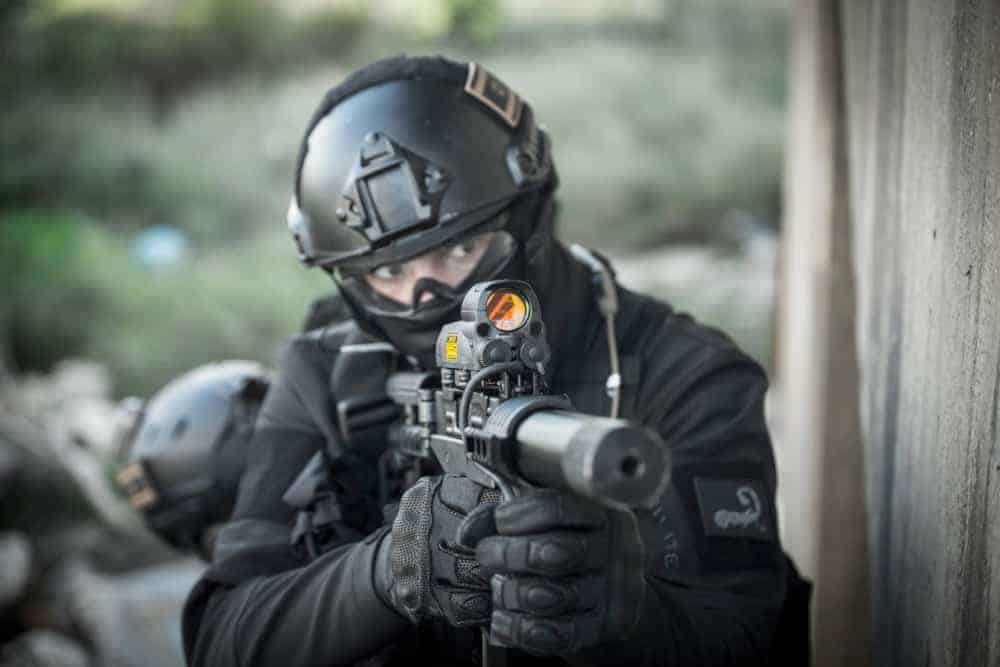